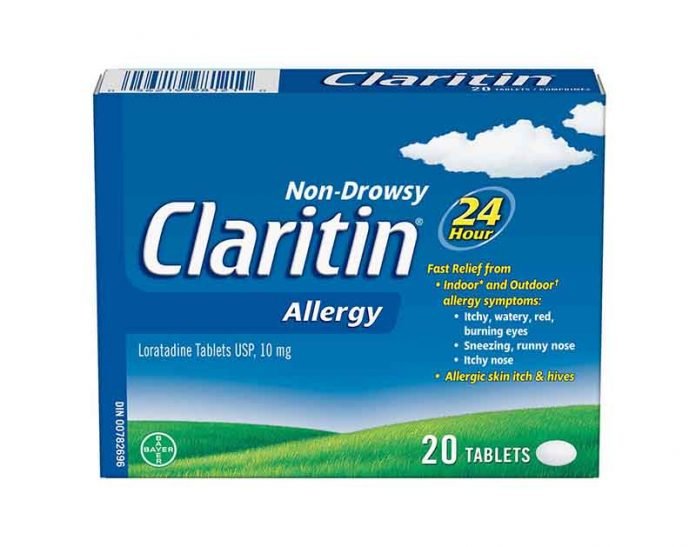 Claritin is an over-the counter (OTC) medication for the generic drug loratadine. It is treatment for upper respiratory allergy symptoms like:

These symptoms are caused by allergens, such as pollen or dust.

When an allergen enters your body, your immune system may mistakenly identify the allergen as a dangerous intruder. Then, it activates chemical agents (such as histamine) to defend against intruders.

Histamine triggers an immune system response designed to elinate allergens in the body. You start sniffing, sneezing and itching.

Loratadine is part of a medicine called an antihistamine. It works by preventing histamine from binding to histamine receptors in your body. This can stop allergy symptoms.

Because most antihistamines are central nervous system depressants that cross the blood-brain barrier to cause sedation, it is best to avoid drinking while taking them. Although Claritin has less risk of sedation and drowsiness than many other antihistamines, combining it with alcohol can still result in more sleepiness than you may expect.

Risk of Taking Claritin with Alcohol

Taking Claritin with alcohol can cause drowsiness. Further, because Claritin can last in your system a long time. This is true if you have kidney or liver problems or are elderly, which can make the drug reach higher levels in your system than normal.

Is Sedation Dentistry Necessary | How Safe Is It | Allergies

What is papaya soap and when should I use it?

@2021 HealthySketch. All rights reserved. The content of this site is shared by users, and only used for referrence. It cannot be used as diagnosis or medical treatment guideline!

The six reason your baby crying for stomach flatulence

What Sunscreen Is Best For Girls — JAPANESE SUNSCREEN

The Benefits Of Sleeping Left Side

We will mail you the latest information and stuff, don't worry, you will love it ~